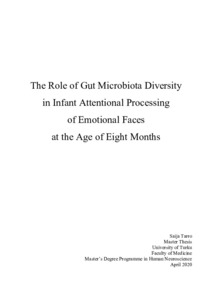 The Role of Gut Microbiota Diversity in Infant Attentional Processing of Emotional Faces at the Age of Eight Months
In recent years a lot of interest has been put in linking neuroscience and microbiology together as we start to understand the importance of the bacteria to our brain health and concept of gut-brain axis have been launched. Gut microbiota can influence neurodevelopment in several mechanisms including immunological, endocrine, neural and metabolic pathways. Germ-free rodent studies show that microbiota is necessary for normal stress responsivity, fear-related behavior, anxiety-like behaviors, sociability and cognition in sex specific manner. Recent human studies demonstrate that gut microbiota diversity is associated with temperament, cognitive performance and differences in amygdala-thalamus connectivity, which is central in processing emotional information. In addition, human probiotic intervention studies have suggested that probiotics intake reduce negative mood and might help in preventing depression.
Infant is selecting information from sensory input by orienting attention. Already newborns’ attention is biased towards faces. Another attention bias emerging during second half of first year is the heightened bias towards faces expressing fear, called fear bias. Attention bias for fear can be seen for example in a slower or less probable disengagement of attention from fearful or angry faces as compared to happy or neutral faces. Deviations in early emotion processing from facial expressions may influence the trajectories of socio-emotional development.
The data for this master thesis was a sub-sample (n=126) from FinnBrain Birth Cohort Study. Aim was to investigate the associations between early gut microbiota alpha diversity/richness and infant attention to emotional faces. The possible sex differences in these associations were also investigated. The gut microbiota diversity was assessed at 2.5 months of age and analyzed with 16s rRNA sequencing. Attention to emotional faces was assessed with eye tracking using age-appropriate face-distractor paradigm microbiota at the age of eight months.
In this master thesis no associations between gut microbiota diversity and attention to emotional faces was found. Probability of disengagement was lowest for fearful faces. The only significant correlation was found between fear bias and gut microbiota richness in boys but not in girls, but there was not statistically significant interaction between the sex and gut microbiota in a linear regression model controlling for mode of delivery and breastfeeding. This data encourages for further human studies to illustrate the potential underlying neural structures of emotional attention and gut microbiota in sex-specific manner.
Keywords: microbiota, gut-brain-axis, brain development, face processing, threat processing, attention mechanism, emotional attention