Frame Change Due to Policy Change: A Corpus Study of the Changing Frame of Israel in the US Media After Jerusalem Was Recognized as Capital

Frame Change Due to Policy Change: A Corpus Study of the Changing Frame of Israel in the US Media After Jerusalem Was Recognized as Capital 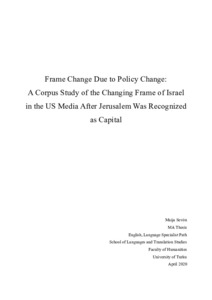 This thesis examines the change in frame caused by political decision making. The USA decided to recognize Jerusalem as Israel’s capital in December 2017, changing their policy and tradition that has been in use for nearly 25 years. This change is considered one of the biggest policy changes in the USA in decades, making it significant enough to cause frame change. Here, the thesis concentrates on the media representation of Israel, and how the frame the media builds was changed after the policy change. Framing in media has been studied before, but the effect of outside factors or this particular case has yet to be studied, making this thesis relevant and filling a gap in the field. The study is based on a corpus that was collected from three major news outlets in the USA: CNN, FoxNews and the New York Times. They were considered to represent the US media both geographically and to cover the US political spectrum. The material was collected online, in order to establish as wide as possible coverage. All news referring to Israel were published between 6th November 2017 to 5th January 2018. In addition to Frame Analysis, this thesis approaches framing and frame change through Critical Discourse Analysis. Since the study is based on corpus, Corpus Linguistics was considered a relevant point of view. In order to examine changes, a comparative, qualitative approach is needed. The main corpus was divided into two sub-corpora to represent timelines before and after the acknowledgement of Jerusalem as capital. The sub-corpora were analyzed with the AntConc corpus program, and both collocation and concordance analyses were conducted using search words israel, israeli, jews and jewish. The results of the analyses were examined, and frames of both timelines established. Those frames were then compared to each other in order to detect changes in the frame of Israel. It is concluded that changes have occurred in the frame of Israel after the acknowledgement of Jerusalem as capital and they were considered to be caused by this policy change. Changes in representation of people and communities, as well as politics and government were seen. The most affected change in general was Israel’s agency in matters that involve it. In addition, a general increase in variation was seen in Israel-related news after the acknowledgement. Due to the qualities of frames, it cannot be determined if the found change is constant, developing, or temporary, which gives room for further research.