Manifesting Personal Brands in Politics: Strategic Manoeuvring by Hillary Clinton and Donald Trump in the Third US Presidential Debate of 2016

Manifesting Personal Brands in Politics: Strategic Manoeuvring by Hillary Clinton and Donald Trump in the Third US Presidential Debate of 2016 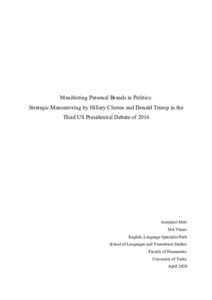 In this thesis I investigate how the political brands of the two presidential candidates of the 2016 US presidential election, Hillary Clinton and Donald Trump, were manifested in their argumentation during the third and final presidential debate of 2016. The method used for the analysis is the extended theory of pragma-dialectics, which includes the notion of strategic manoeuvring. The theory allows the evaluation of how the candidates balanced the simultaneous objectives of adhering to the rules of argumentation while manoeuvring the discussion to a direction that was in their favour. The analysis focuses on a 15-minute segment of the debate, the topic of which was fitness to be the president of the United States. The analysis indicates that both candidates strategically manoeuvred the discussion toward topics that were beneficial for their brand or detrimental to the opponent’s brand. The most notable differences between Clinton’s and Trump’s argumentative strategies were related to the core characteristics of their brands: Clinton was a politically experienced insider, while Trump was a newcomer to politics and promoted the image of an uncorrupt outsider who “says it like it is.” Clinton highlighted her brand by demonstrating her well-preparedness with a full and coordinated argumentative strategy and premeditated argumentation structures. Trump, on the other hand, maintained his brand as a man of the people by arguing much more like an uneducated non-politician would. The most notable features of Trump’s argumentation were the copious violations of the rules of argumentation, which indicate that his desire to “win” the argument overruled his desire to argue reasonably. The findings of this study demonstrate that not complying with the rules of a critical discussion may be beneficial for the speaker’s brand when their brand as well as the expectations of the audience allow it. However, when a person who is branded as someone who “says it like it is” and uses fallacious argumentation, the danger of the introduction of more radical ideas presents itself. Thus, critical thinking and awareness of the copious strategies used in political branding are becoming increasingly important.