What we mean when we talk about bisexuality : a critical discourse analysis of self-definitions by bi-identified people online

What we mean when we talk about bisexuality : a critical discourse analysis of self-definitions by bi-identified people online 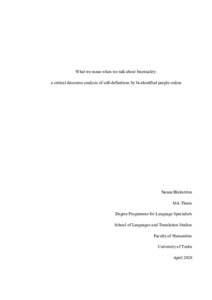 A Critical Discourse Analysis on the language used by bisexual people when defining bisexuality. The aim of the thesis is to define current discourses about bisexuality within the modern frameworks of sexuality and gender and explain why bisexuality lacks the stability and visibility of other minority sexualities. The material is gathered from profiles submitted to a website with the purpose to educate about and bring visibility to bisexuality. Research is conducted according to Fairclough’s methodology and Halliday’s Systemic Functional Linguistics within the framework of postmodern critical theory. Despite the frequent use of relational intensive process verbs, clauses defining bisexuality are marked as subjective with the choice of Subject and circumstantial information. Bisexuality is defined by what it is not by rejection of stereotypes. The lack of established cultural imagery shows that bisexuality cannot be performed as an identity. Additionally, it cannot be categorized as a sexual orientation, because it is not supported by the gender frameworks that define sexual attraction. For bisexuality to exist as a solid sexual identity, sexual and gender frameworks need to be redefined.