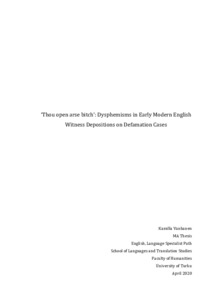 The Early Modern English period (roughly 1500-1800) was a time in which a great number of defamation suits were fought in ecclesiastical courts. Most often, the litigants were female, and sexual slander was the most common type of defamation recorded in ecclesiastical court records in Early Modern era. Words such as whore, bitch and quean were among the most common terms written down in witness depositions, with many different modifiers such as drunken, impudent and pocky used to strengthen the defamatory meaning of the said terms. These terms are collectively known as dysphemisms – their use is usually motivated by malice and hate, and they are used to insult or disparage others. The focus of this study was in such dysphemisms, and the aim was to see how those terms could be categorised in terms of the way they insult someone and whether women and men were defamed differently.
The depositions in this thesis have been collected from An Electronic Text Edition of Depositions 1560-1760 (ETED), a CD-ROM that is included in Testifying to Language and Life in Early Modern England edited by Merja Kytö, Peter J. Grund and Terry Walker (2011). In terms of data collection, all depositions from three deposition collections (spanning from 1667 to 1715) were examined manually, and those defamation suits that included dysphemisms were included in the study, namely 13 defamation cases in total. Depositions and dysphemisms have been subjects of many studies especially from the Early Modern period, but there was room for a study that explored dysphemisms recorded in witness depositions.
The findings of this thesis are concurrent with previous studies: since the majority of the dysphemisms referred to sexual behaviour, sexual slander was the most common type of defamation in the data, with only two non-sexual slander suits, both with male plaintiffs. The litigants were also more often women than men; in my material, only three defamation cases were brought by men. Based on these results, dysphemisms in witness depositions could be examined in the future in a much larger scale in order, for example, to see how the use of defamatory words and phrases change in time.