“I pity her that she is born to be a queen”: Evaluation of Caroline of Brunswick in Lady Charlotte Bury’s 1838 Diary

“I pity her that she is born to be a queen”: Evaluation of Caroline of Brunswick in Lady Charlotte Bury’s 1838 Diary 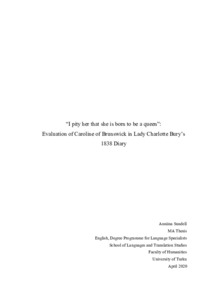 Diaries serve as a means to record and process the writers’ daily lives and mindsets, and hence preserve them as memories of the past. For researchers, however, historical diaries provide unique insight on the contemporary cultural atmosphere addressed by individuals. While writing down their experiences and opinions, the diarists choose specific, evaluative narratives to depict their reality. By studying diaries and the evaluative language in them, it is possible to acquire a more in-depth knowledge of the writers’ motives in portraying their subjects in a certain light.

This thesis concentrates on the published diary of Lady Charlotte Bury, who recorded her life as a lady-in-waiting in the early 19th century court of Princess Caroline of Brunswick. Princess Caroline lived a controversial, scandal-filled life under the public persecution of her husband George, Prince of Wales and later King of the United Kingdom. The aim of this thesis is, then, to shed light on the character of Princess Caroline by discovering how she is evaluated by Lady Charlotte Bury in her diary, and to analyse how these evaluations depict Princess Caroline to the public. The diary entries were subjected to a close reading in order to collect the writer’s direct evaluations of Princess Caroline. The varying types of evaluative expressions were then categorised and analysed according to the models of Appraisal Framework, established by J. R. Martin and Peter R. R. White (e.g. 2005). The framework provides a detailed categorisation system of evaluative language by introducing a lexical approach that enables the study of varying emotions, assessments and stances in texts.

The framework distributes Appraisal, positive or negative expressions of evaluation, into three main categories of Attitude, Graduation and Engagement. Attitude can be seen as the primary resource for distinguishing and describing evaluations, and it is further divided into the domains of Affect (emotion), Judgement (ethics) and Appreciation (aesthetics). The findings of the data were presented under these three categories with supplementary remarks of Graduation and Engagement in order to exemplify how they are applied to evaluate Princess Caroline.

Evaluations of Affect and Judgement were utilised the most: expressions of Affect were strongly linked to feelings of sympathy, fear and anxiety towards Princess Caroline’s fate whereas expressions of Judgement praised her as an affectionate, independent and clever person, but also criticised her continuously reckless and unwise actions which were inspired by her love for ease and entertainment. All the evaluative strategies considered, Princess Caroline is depicted as genuinely kind but similarly foolish, which contributed to her unhappiness as the persecuted princess and queen.