The Hanoi Summit and Politically Biased Language : A Critical Discourse Study on Political Bias in the Language of Two South Korean newspapers

The Hanoi Summit and Politically Biased Language : A Critical Discourse Study on Political Bias in the Language of Two South Korean newspapers 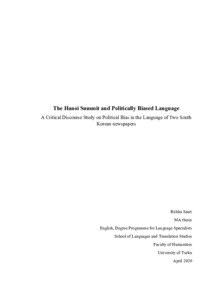 On 27– 28 February 2019 the United States President Donald Trump met with the North Korean leader Kim Jong-un in Hanoi for a second US-North Korea summit. This study focuses on possible politically biased stances in several English language news articles from two prominent South Korean newspapers. The aim of the study was to find out if the two papers displayed biased attitudes that were visible in the language of the articles, and if the possible biases were consistent with the previously research biases of the papers. The linguistic framework used in this study was Martin and White’s Appraisal framework (2005). The sections of Attitude and Engagement from the framework were determined to best suit the needs of this study because it centers around value judgements and opinions expressed in the texts, as well as the commitment to those opinions and other voices in the text. The study also focuses on the different sources journalists deployed in the articles, their distribution, and the possible effects of uneven distribution of sources in terms of Appraisal and representation. This study also viewed the issue from the critical standpoint of misuse of power and the manipulation of audience, adding a Critical Discourse Analysis viewpoint to the issue. The analysis consisted of two parts: the analysis of Appraisal features, as well the analysis of different sources. In addition, effects different sources had on the Appraisal features found were also discussed. The methods used were both qualitative and quantitative. This study found that despite the changing public attitudes towards engagement with North Korea, the perceived polarization of the South Korean news media in regard to North Korea is still persistent, even in English language ‘hard news’ articles. The results showed differences in the ways in which the two papers utilize authorial and non-authorial Appraisals, as well as differences in the sources they use. While one paper was clearly more inclined to negative Appraisal of both the summit itself as well as the actors involved in it, the other paper displayed a more positive bias, and these results were comparable with the opinions of the two ruling political parties in South Korea.