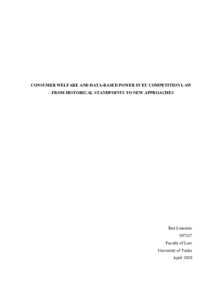 The research focuses on the topic concentration of market power in the digital economy and its negative effects on consumers and society. The goal of consumer welfare in EU competition law and its redefinition is the overarching theme that connects the other goals of EU competition law, anti-competitive concerns in the digital economy and the ideas of ordoliberalism together. The objective is to highlight how a historical approach to the goals of EU competition law can help to redefine the basis of consumer welfare from a more well-founded standpoint.

The concerns of ordoliberalism, which emerged as a school of thought in Germany in the first half of the 20th century, and the ones in the digital economy are similar. Understanding the connections between economic and political power in society is the starting point for the research. The main references consist of research on ordoliberalism, social sciences and on competition law.

The evolution of consumer welfare standard is assessed from its inception in the Chicago School to the current significance in EU competition law, concluding in the challenges that the digital economy brings to its definition, for example regarding the question of whether privacy should be included in its scope. These challenges are linked to digital platforms’ data collection practices which result in the concentration of economic power in the hands of a few. Economic assessment of consumer welfare should be kept as the baseline, but other values should be included in its scope to capture the harms that occur to consumers in the digital economy.

Concerning the concentration of power, the ordoliberal concerns in the 20th century and their connections to the current situation are discussed. Also, other relevant goals of EU competition law, such as effective competition structure and process, efficiency, innovation, economic freedom and democracy are assessed together with their connections to the welfare of consumers and ordoliberalism.

To conclude, it is presented that the goal of consumer well-being should be the new, overarching goal of EU competition law, which combines the social values of ordoliberalism with the goals of political and economic freedom and effective competitive process. By assessing the current concerns from a historical point of view, one can avoid the fallacy of seeing today’s issues detached from the past and focus on strengthening the flexible, goal-based approach of assessing the current market realities.