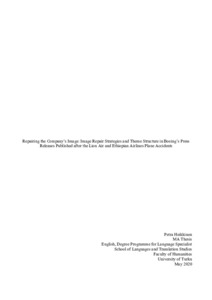 In 2019, aerospace giant Boeing faced a public image crisis when two of their planes crashed fatally only five months apart. In this comparative study, I examine Boeing’s image repair efforts in their press releases issued after these accidents. Since both plane crashes involved the same jet model and the preliminary investigations revealed that the pilots in both planes experienced similar problems with the flight control law, the accidents posed a severe threat to Boeing’s image.

The results of the study revealed that bolstering was the primary image repair strategy used both before and after the second accident, which implies that the company reinforced the positive image by emphasizing its good qualities and good deeds in the past. The results also indicated that Boeing increased the use of corrective action as an image repair strategy after the second accident. In addition to the two most frequent strategies, also praising others, simple denial and shifting the blame were used. The theme structure analysis revealed that themes referring to the company itself were overwhelmingly most common throughout the data and they were paired with rhemes that bolster the company’s image. The thematic position was also utilized in order to shape the audience’s perceptions and it was done more often after the second accident.

Overall, the image repair efforts increased and changed after the second accident, when the allegations also increased. Even though Boeing did not accept full responsibility of the accidents, they increased the use of corrective action by promising to prevent such accidents happening again and making enhancements to the flight control law, pilot training and manuals.