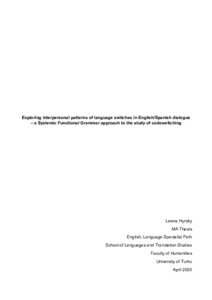 The topic of this thesis is the exploration of possible interpersonally connected patterns in the use of codeswitching from English to Spanish in the speech of fluent bilinguals. The thesis bases its relevance on the need for more comprehensive understanding of characteristics of codeswitching, and it sets out to implement the Systemic Functional Grammar framework into the study of codeswitching. The study focuses on the interpersonal metafunction, in which the clause is considered as an exchange and the meanings relate to social relationships.
The data of the study consists of 60 clauses from fluent bilingual Latino characters from a fictional Netflix series Orange Is the New Black containing intrasentential codeswitches from English to Spanish. The data is analysed for the Mood-Residue structure found in the interpersonal metafunction of Systemic Functional Grammar by Halliday and Matthiessen (2014) to localize the codeswitch into a certain grammatical component which the elements entail: Subject, Finite, Predicator, Complement, Adjunct and the interpersonally connected components Vocative and Expletive. The study aims to answer the research question of what types of patterns of CS use emerge from the analysis through SFG. The hypothesis is that CS is localized in the Residue as not to interrupt the message of the clause and due to the difference in the importance of the Mood element in English and Spanish. The thesis also discusses the implications for the behavior of codeswitching based on previous grammatical research of codeswitching. The results are discussed in regard to the research question, the hypotheses made as well as implications on how the field should proceed in the study of codeswitching from a Systemic Functional Linguistic point of view.
The analysis revealed that codeswitching occurs in both the Mood and the Residue elements but is more frequent in the Residue and the Vocative component, which falls outside the Mood-Residue structure. Two prominent patterns were revealed: there were no switches in the verbal components Finite and Predicator and thus the codeswitches in the Mood element occurred only in the Subject component, and the Vocative component was the most frequent localization for a switch. The fictive nature and the occurrence of mainly one-word switches in the data inhibits the generalization of the results, but the study offers insight into possible underlying reasons for patterns in codeswitching between English and Spanish and offers suggestions on how the Systemic Functional Grammar framework could be used to study codeswitching.