Predator-prey dynamics under variable salinity in the Baltic Sea: the case of an invasive predatory crab, Rhithropanopeus harrisii and a native mussel, Mytilus trossulus

Predator-prey dynamics under variable salinity in the Baltic Sea: the case of an invasive predatory crab, Rhithropanopeus harrisii and a native mussel, Mytilus trossulus 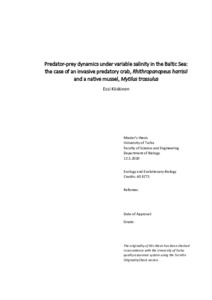 Invasive species and other types of environmental change can have antagonistic, synergistic or additive mutual effects and unexpected and irreversible consequences to native communities. Salinity is an important environmental factor for aquatic species, and salinity level that does not fall within the optimal range can cause changes in their morphology. Such changes can also influence the interactions between native and non-native species if they occur in their functional characteristics. My thesis focuses on evaluating whether the Harris mud crab (Rhithropanopeus harrisii), a fast spreading non-native species, is affected by the present and future projected salinity variation in the Baltic Sea, and if salinity affects indirectly the predator-prey interaction between the mud crab and the native blue mussel (Mytilus trossulus). For this purpose, I monitored growth of claws and body size and survival of adult Harris mud crabs in three salinity levels, which correspond to the salinity in the northern and eastern gulfs of the Baltic Sea (2.5 ppt), in the present distribution range of R. harrisii in the Archipelago Sea (5.5 ppt) and in the Baltic proper (7.5 ppt). Due to climate change, salinity of 5.5 ppt may drop to 2.5 ppt in the current distribution areas of the Harris mud crab and 7.5 ppt may retreat from the Baltic Sea altogether. The growth of body size was not affected by salinity, but the growth of male cutter claw height increased in salinity of 7.5 ppt compared to the lower salinities. Therefore, it seems that growth and claw allometry of the mud crab are rather unaffected by the present salinity gradient or predicted salinity decrease in the future. Survival increased with decreasing salinity. In addition to the salinity experiment, the critical blue mussel size for the Harris mud crab was determined. There was a clear relationship between both the claw and body size of the mud crab and its critical prey size – the larger the mud crab, the larger mussel the crab was able to handle. Male Harris mud crabs were able to crush larger prey than females due to their relatively larger claws. The largest blue mussels can reach a size refugia from crab predation but a large part of the blue mussels in the Archipelago Sea are smaller than the size required for refugia and mean mussel size further decreases with decreasing salinity. Lastly, the relation of shell strength and size of blue mussels was evaluated and compared between two populations from differing salinity levels. Mussels from lower salinity had weaker shells in relation to length than mussels from higher salinity. All things considered, unaltered growth and claw allometry along the salinity gradient of the Baltic Sea would mean no effects on the critical prey size and, therefore, no changes in the ecological impact of the invasive predatory crab on mussel populations. However, blue mussels may be more vulnerable to crab predation in low salinities due to smaller size and weaker shells. Overall, this study suggests that the Harris mud crab of the Archipelago Sea is well-adapted to low saline environments and has the potential to spread further to the north-eastern areas of the Baltic Sea.