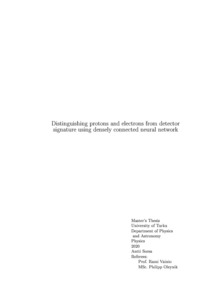 The FORESAIL group is a collaboration of four Finnish scientific institutions, and one of the research subjects is the detection of radiation using small satellites. One of the challenging tasks is the measurement of relativistic particles, and one way to implement this is to use a series of silicon pixel detector plates and aluminium and tantalum absorbers. Resources aboard a small satellite are limited, as well as the link speed to Earth. Therefore an efficient solution for automatic particle categorization onboard would be beneficial.

In this work, the radiation environment and particle dynamics in Earth's magnetosphere are shortly studied along with some commonly used particle detection techniques, such as the ∆E-E method. For the particle categorization solution several neural network development tools and network types were compared. The proposed neural network was implemented with Google TensorFlow and Python and the parameters of the network were calibrated using automatic loops. The main objective was to explore whether a small-scale neural network would be sufficient in categorizing electrons and protons along with their energy and incident angle.

The detector was modelled using Geant4, and also the test material was generated with it using Monte Carlo simulations. The Geant4 output was parsed in Python into the TensorFlow program, where it was used in training the neural network. Then the detection accuracy was tested using simulated and also modelled realistic proton and electron spectra.

The network was able to distinguish any two input sets quite well, not showing much degradation in detection accuracy when changing energies and other properties of the particles. However, multiple categorization ability of the designed network didn't prove very good, and most probably would require more complex neural network architecture or different type of design.