A Study of Astronomical Polarization, Polarimetric Observations and Polarimetry of Exoplanets

A Study of Astronomical Polarization, Polarimetric Observations and Polarimetry of Exoplanets 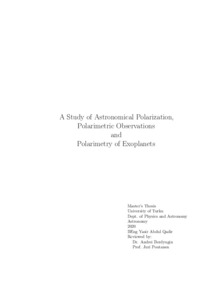 Astronomical polarization has become one useful tool to study a number of astronomical objects and related astrophysical mechanisms. The polarization of electromagnetic waves is caused by various astronomical phenomena. One such phenomenon is when the light emitting from a planet(s) hosting star is reflected by the orbiting planet(s). However, the degree of polarization due to such events is tiny and their observations require highly sensitive polarimeters. DiPol-2 is a one such high sensitivity polarimeter that can measure polarization degree of more than $10^{-5}$. The polarimeter is presently installed with T60 telescope at Haleakal\={a} observatory in Hawaii and is operated remotely by Physics and Astronomy department at University of Turku.

We used DiPol-2 to observe a hot Jupiter exoplanet named $\upsilon$ And b in B, V and R passbands. These observations were made using the combination of T60 and DiPol-2. It was the first time that these instruments were used together to record polarimetric observations of an exoplanet. Stokes parameters describe the state of polarization and variations in these parameters can help to deduce orbital parameters and/or stellar, planetary characteristics. This process however requires that data visualization to be compared with numerous models that have been developed to interpret polarimetric observations. The polarimetric observations started in the second half of 2016 and continued till early 2019. We observed the target whenever observing time allocation and observation conditions allowed it. The observational data then went through a lengthy process of data transfer and data reduction.

For data analysis, Lomb-Scargle algorithm was used to deduce orbital periods present in the data. Lomb-Scargle periodogram showed a number of peaks with different orbital periods. It was deduced that the presence of multiple orbital periods was due to magnetic activity on the stellar surface that contaminated polarimetric signals of the exoplanet. To further visualize the data, curve fitting was performed using Fourier series in order to deduce orbital peaks of $\upsilon$ And b and estimate the planetary albedo. We were able to estimate values for a few parameters but at this point it has not been possible to separate planetary signal from the stellar signal. This task would require a sophisticated model and that was beyond the scope of this study.