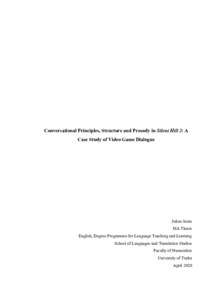 This research was conducted in order to investigate the dialogue in the video game Silent Hill 2 from a discourse analytical perspective. More specifically, the research questions posed for the purpose of this study pertain to explaining why the dialogue in the video game seems peculiar considering conventions and principles of language use. In addition to examining these features of the dialogue, the study takes interest in how the developers of Silent Hill 2 might have, either consciously or unconsciously, manipulated these principles in order to convey an effect of uncanniness and unconventionality. As a secondary objective, the case study attempts to address the academic worth of video games and reinforce their position adjacent to other forms of art and media such as books and films.

The theoretical approach adapted in this study to analyzing the dialogue in Silent Hill 2 is versatile, including pragmatic, conversation analytical as well as phonological dimensions. Pertaining to these subfields of linguistic research, the paper applies the concepts of cooperative principle, adjacency pairs and prosody in examining and explaining features contributing to the peculiarity of the dialogue. Furthermore, the methodological approach of the present paper is specified to utilize qualitative methods of data analysis, enabling detailed description and observation of extracts showing deviation from conventional use of language among the dialogue. The analysis aims, more specifically, at pinpointing indirect and vague expressions, nonadherence to conventional sequence of utterances as well as pauses and word-level stress in conversations between the characters of the narrative.

The findings yield essential results in terms of the research questions posed in the beginning of the paper. Based on the analysis, the dialogue in Silent Hill 2 builds on, as hypothesized, unconventional interactive sequences e.g. through questions and greetings not being reacted to, indirect and ambiguous verbal expression as well as inconvenient pauses and stressing. It remains uncertain whether these conversational properties have been deliberately seized by the developers of Silent Hill 2: Nevertheless, it is plausible to conclude that the interactive patterns between the characters of the narrative essentially contribute to the renown of the video game as one of the most profound video games of all time in terms of characterization and subtext.