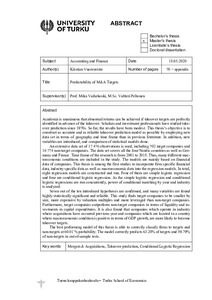 Academia is unanimous that abnormal returns can be achieved if takeover targets are perfectly identified in advance of the takeover. Scholars and investment professionals have studied takeover prediction since 1970s. So far, the results have been modest. This thesis’s objective is to construct as accurate and as reliable takeover prediction model as possible by employing new data set in terms of geography and time frame than in previous literature. In addition, new variables are introduced, and comparison of statistical models done.
An extensive data set of 17 476 observations is used, including 702 target companies and 16 774 non-target companies. The data set covers all the four Nordic countries as well as Germany and France. Time frame of the research is from 2001 to 2018. Thus, many different macroeconomic conditions are included in the study. The models are mainly based on financial data of companies. This thesis is among the first studies to incorporate firm specific financial data, industry specific data as well as macroeconomic data into the regression models. In total, eight regression models are constructed and run. Four of them are simple logistic regression and four are conditional logistic regression. As the simple logistic regression and conditional logistic regressions are run concurrently, power of conditional matching by year and industry is analyzed.
Seven out of the ten introduced hypotheses are confirmed, and many variables are found highly statistically significant and reliable. This study finds target companies to be smaller by size, more expensive by valuation multiples and more leveraged than non-target companies. Furthermore, target companies outperform non-target companies in terms of liquidity and investments in capital expenditures. It is also found that companies which operate in industry where acquisitions have occurred previous year and companies which are located in a country where macroeconomic condition is positive in terms of GDP growth, are more likely to become takeover targets.
The best performing model of this thesis is able to correctly classify firms to targets and non-targets at 60.01 % probability. The model correctly predicts 63.20% of targets and 59.79% of non-targets in out of-sample tests.