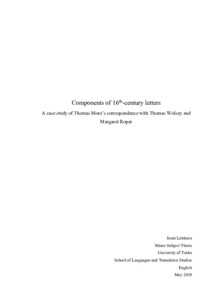 In this minor subject thesis are studied the correspondence of Thomas More from the point of view of letter-writing models. More’s letters’ form is compared to a model provided by Anneli Bergholm in her MA thesis from 2008. She suggested a more accurate model for 15th-century letters based on her study of previous letter models and family letter collections of the late 15th century.
The main purpose of this study is to find out whether the letter model for late 15th-century letters corresponds to the letters written at the beginning of the 16th century. In addition, as letters to two correspondents were examined, the goal was to find out whether there is difference between the letters to different correspondents and how does it show.
The material was chosen from letters More wrote in English to Thomas Wolsey and Margaret Roper. Altogether are studied 16 letters, eight letters from each correspondent. The letters are analysed by using the method of close reading. Bergholm’s model consists of seven main elements and nine optional elements which a letter can contain. The analysis shows that the letters to different correspondents are different and that altogether More’s letters do not follow the letter model Bergholm provided, save for a few elements.