Fan-made Football Journalism : Its Position in the Media Landscape and Its Critique of Mainstream Journalistic practices : The Case of Arseblog

Fan-made Football Journalism : Its Position in the Media Landscape and Its Critique of Mainstream Journalistic practices : The Case of Arseblog 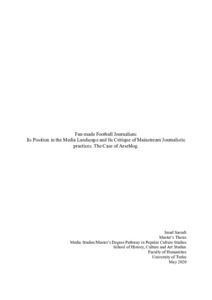 With the Web 2.0 facilitating the production and dissemination of content, new actors entered the sport media landscape. A relatively new presence is the fans who made a profession out of their fandom and textual productivity, going further than blogging and turning into professional independent journalists, specialists of their favorite team. They cover and report on the object of their fandom, operate their own fan-centered digital media outlets, and produce content on a daily basis.

The case study of this thesis, Arseblog—a news website and blog dedicated to the London-based football team Arsenal—is one of these hybrids merging traditional sport journalism and fan blogging, rooted in the football zine tradition. While previous studies have shown how this type of fan labor tends to be critical of the mainstream media, this thesis seeks to unravel the specific way in which it does so by looking into the Arseblog example. It also investigates how Arseblog negotiates its position as an alternative media, and what makes it stand out in the media landscape. Critical discourse analysis was applied to two Arseblog articles using Fairclough’s three-dimensional model to examine the existing power dynamics between this type of alternative media and its mainstream counterpart, as well as to shed light on its distinctive discursive features.

The study concludes that Arseblog supplements and critiques mainstream media outlets’ coverage of Arsenal by its ability to step back from the immediacy of events, and act like a media observer and news stories curator. Moreover, it is able to demarcate itself from the mainstream media by allowing the fans to take center stage in their narratives, and by adopting creative ways of reporting which draw on several genres and uncommon discursive practices in football writing.