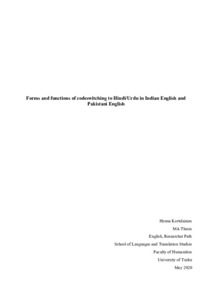 This study examines the forms and functions of codeswitching to Hindi/Urdu in Indian English and Pakistani English. The aim is to find out how these local languages manifest and are used in the local non-native variety of English. Previous research on codeswitching to Hindi and Urdu in Indian English and Pakistani English has mostly concentrated only on the use of single lexical items and their impact on the lexicon of the local English leaving the more varied ways in which the local languages show relatively unresearched. The material was collected from the Corpus of Global Web-based English (GloWbE). This study served additionally as a methodological experiment using the most frequent Hindi and Urdu words to locate and collect codeswitches in the corpus.
The analysis of the structural patterns showed that Hindi and Urdu codeswitches manifest in a variety of different forms ranging from longer intersentential codeswitches for complete Hindi and Urdu sentences to interclausal switches, i.e. switches between main and dependent clauses, and to shorter intraclausal codeswitches like words and phrases. The structural analysis also revealed that the structural patterns appear to follow the same tendencies in both Indian and Pakistani English.
The Hindi/Urdu codeswitches also served diverse types of functions. The switches could roughly be divided into switches with a communicative function and cultural switches. Communicative functions included, among others, quotations, figurative language, conveying greetings and prayers, interjections, reiterations, and metalinguistic commentary. Cultural codeswitches expressed objects and concepts specific to the Indian and Pakistani culture. Cultural switches also functioned as references to the Indian and Pakistani culture implying the Indianness or Pakistaniness of something or someone.