The macro-regional project of Intermarium: The Baltic state’s perspective

The macro-regional project of Intermarium: The Baltic state’s perspective 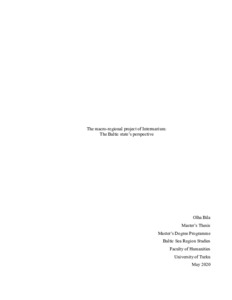 The main aim of this Master’s Thesis is to explore how state and non-state actors of the Baltic countries (Estonia, Lithuania and Latvia) perceive the idea of the regional project Intermarium. The main theory of this research work is the theory of new regionalism, which involves state and non-state actors in the creation of a region. Intermarium or Miedzymorze is a macro-region, which is one of the levels of regionalism, that expands between Baltic and Black Seas. Baltic states play a crucial role in it, as they connect the Baltic sea with other countries up to the Black sea, thereby creating a belt of countries between Western Europe and Russia.
The methodology of this thesis is based on the historical approach, which allowed to investigate the concept of regionalisation in international relations, history of its theoretical dimension; the origins of the Intermarium project and its development until nowadays; the contemporary discussion about the Intermarium project and the perspective of the Baltic countries.
The main conclusion of the research is that Baltic states` governments are not interested in the Intermarium project, but they pay great attention to a similar project – The Three Seas Initiative. However, Intermarium got support from such non-state actors as far-right groups. Nevertheless, its perspectives remain questionable and doubtful.
The further researches may focus on the role and perspectives of the Three Seas Initiative project in the Baltic region, as well as the role of the far-right groups in such kinds of initiatives.