“The race of the officer was not disclosed” : A systemic functional grammar analysis of the Ferguson shooting media coverage 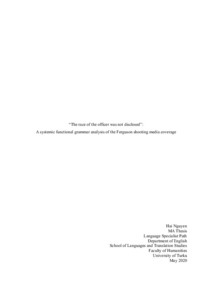 This thesis examined the representation of African Americans in the Ferguson news coverage in CNN and Fox News online news using critical discourse studies, systemic functional grammar and corpus linguistics methodology. Representation was studied using a combination of transitivity analysis and corpus linguistic methods. The aim of the thesis was to uncover possible racist language in the news, which is often thought of as neutral and objective. The key frameworks used in the thesis were Fairclough’s and van Dijk’s conceptions of critical discourse studies, especially concepts of power and discourse, and Hill’s folk theory of racism and Bonita-Silva’s and Omi and Winant’s similar concept of color-blind racism.

Fox News and CNN were chosen as the subject of study because they are two of the most popular online news media in the United States, and because the two have also been the subject of study in media bias research. Previous research has shown that Fox News has a tendency to lean toward a pro-Republican stance, while CNN has the same tendency toward the Democratic party. The event of the news coverage was chosen because of its social significance: while examples of police brutality against African Americans are not new nor rare, Michael Brown’s death and the protests that followed gave national recognition to the Black Lives Matter movement, which attempts to call attention to issues of injustice toward African Americans in the United States.

The study would have benefited from a full range systemic functional analysis, as two metafunctions of systemic functional grammar were left out due to the range of the thesis. A more in-depth analysis would have yielded a better understanding of how the media use language to construct social actors, racialized or otherwise. However, despite the narrow analysis, the data across the two media shows clear results. In my thesis I also show that previous research in critical discourse studies has not discussed the issues relating to citizens of color, instead scholars have focused on immigrants, refugees and asylum seekers.