Lexical Variation, Target Preference and Language Attitudes with Respect to American and British Englishes : A Mixed Methods Study of Undergraduate Students of English in Finland

Lexical Variation, Target Preference and Language Attitudes with Respect to American and British Englishes : A Mixed Methods Study of Undergraduate Students of English in Finland 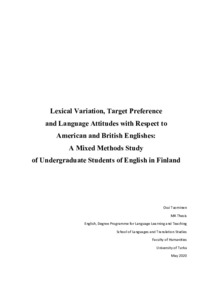 The legitimacy of the English used by non-native speakers is an is an ongoing debate. This debate is intertwined with the question of which variety of English should be used as the model in formal education. This study intends to provide information for both discussions by examining the relationship of the performance and the attitudes of Finnish undergraduate students of English (N = 40) with respect to American English (AmE) and British English (BrE). To this end, three variables are examined: 1) varietally distinct lexical choices, 2) target preferences, 3) language attitudes (on the dimensions of status and competence and social attractiveness). These variables enlighten the position of the two major varieties of English in Finland, and their interrelations provide information on whether the students use these varieties as instruments of identity construction.

Lexical choices were studied through elicited translation, whereas target preference and language attitudes were measured on 5-point Likert scales. Lexical choices were generally American, but BrE was slightly favoured as a target variety. Nevertheless, the two variables correlated significantly. BrE was evaluated clearly higher on the scale of status and competence and almost equally with AmE on the scale of social attractiveness. Perceived social attractiveness proved to be a significant predictor of target preference, but status and competence did not. Correlation of social attractiveness and target preference, along with the conducted interviews, suggest that the students’ target preferences reflect their identity. The correlation of the target choice and actual production indicates that the students successfully use AmE and BrE to manifest that identity. The results suggest that formal English tuition should support students in attaining their self-selected target variety. They also support the legitimacy of non-native English by demonstrating that the lexical variation of non-native speakers can be socially motivated.