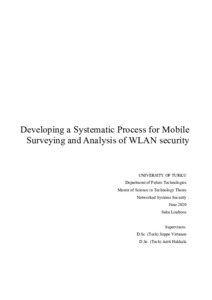 Wireless Local Area Network (WLAN), familiarly known as Wi-Fi, is one of the most used wireless networking technologies. WLANs have rapidly grown in popularity since the release of the original IEEE 802.11 WLAN standard in 1997. We are using our beloved wireless internet connection for everything and are connecting more and more devices into our wireless networks in every form imaginable. As the number of wireless network devices keeps increasing, so does the importance of wireless network security.

The purpose of this Master’s Thesis is to develop a process for surveying wireless local area networks and to survey the current state of WLAN security in Finland. The goal has been to develop a WLAN surveying process that would at the same time be efficient, scalable, and easily replicable. The purpose of the survey is to determine to what extent are the deprecated encryption protocols used in Finland. Furthermore, we want to find out in what state is WLAN security currently in Finland by observing the use of other WLAN security practices. The survey process presented in this work is based on a WLAN scanning method called Wardriving. Despite its intimidating name, wardriving is simply a form of passive wireless network scanning. Passive wireless network scanning is used for collecting information about the surrounding wireless networks by listening to the messages broadcasted by wireless network devices.

To collect our research data, we conducted wardriving surveys on three separate occasions between the spring of 2019 and early spring of 2020, in a typical medium-sized Finnish city. Our survey results show that 2.2% out of the located networks used insecure encryption protocols and 9.2% of the located networks did not use any encryption protocol. While the percentage of insecure networks is moderately low, we observed during our study that private consumers are reluctant to change the factory-set default settings of their wireless network devices, possibly exposing them to other security threats.