The transformation of Finnish vocational education and training : documental evidence and principals' perceptions

The transformation of Finnish vocational education and training : documental evidence and principals' perceptions 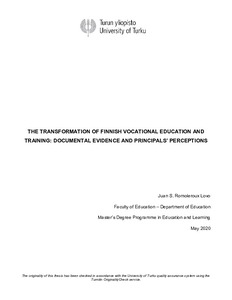 The aim of the research is to study the transformations of vocational education and training (VET) in Finland after the implementation of the 2018 reform, the most extensive restructuring in education legislation in almost twenty years. Two data collection methods were employed: a) document analysis to collect documental evidence from governmental official publications, and b) semi-structured interviews to collect qualitative data regarding the perceptions of VET school principals about the successful practices, challenges and future perspectives of VET in Finland. Documental evidence shows that the key dimensions of the new reform are: the strengthening of the cooperation between schools and the world of work, and the individualization of learning paths from a customer-oriented and competence-based perspective a financing system that awards providers’ efficiency and graduates’ employability rates. The results of the qualitative study show that the reform is moving in the expected direction and its effects are gradually becoming more tangible. However, the changes in the economic dimension might entail a challenge for VET providers, although not all of them experience them at the same degree. The social background is increasingly becoming an influential factor for the educational attainment of VET students. Nonetheless, in despite of its relatively disadvantageous position in respect to general upper secondary, VET will remain an attractive and sustainable study path in Finland for the upcoming years, in particular due to the eligibility it provides for higher education studies.