APPROACHING THE RUSSIAN SOUL: CONSTRUCTION AND MAINTENANCE OF THE IMAGE OF NATIONAL LEADER THROUGH PECULIAR FEATURES OF RUSSIAN NATIONAL MENTALITY

APPROACHING THE RUSSIAN SOUL: CONSTRUCTION AND MAINTENANCE OF THE IMAGE OF NATIONAL LEADER THROUGH PECULIAR FEATURES OF RUSSIAN NATIONAL MENTALITY 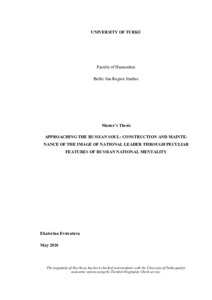 The Thesis considers the question of reasons for a higher public appeal of national leaders with the case study of popular appeal of the President Vladimir Putin among the Russian population. The concepts of nation and national mentality are contemplat-ed to reveal the process of construction of the image of a national leader. In the thesis the author considers the issues of nation and the process of its formation; constructivist and primordialistic approaches to the nature of nationalism and problems of national mentality; genesis of Russian nation and peculiarities of national mindset. Theoretical concepts are applied in the analysis of a TV-program with the participation of the Pres-ident: Direct Line with Vladimir Putin. The author applies a method of interpretive content analysis, which lets answer the research question of how specific characteristics of national mentality are used for the purpose of creating a positive image of the head of state. The program is analysed from the emotional perspective and demonstrates how the basic traits of the Russian national mentality are operated within communication between the nation and the national leader. The analysis is divided into several subsections where different topics are discussed, while specific emotions and peculiarities in national mentality are appealed. As follows from the analysis, the influence and power over a nation is constructed through the intimate knowledge of the nation’s mentality specifics. The research comes the conclusion of inevitability to comprehend the nation, its history, culture, and system of values for a national leader for the construction of public approval and loyalty.