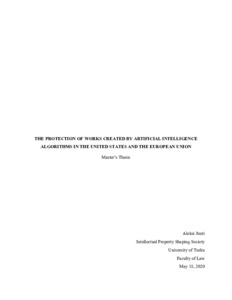 This thesis examines the copyrightability of machine-generated content in the United States and the European Union. For the purposes of this thesis, machine-generated content is content that has been created by an autonomous machine or an artificial intelligence algorithm. The amount of content created by autonomous machines has increased over the years, and today there are millions upon millions of works created solely by artificial intelligence systems.

The thesis is divided into a total of nine chapters, outlining certain definitions, justifications for copyright protection, different stances and issues related to AI authorship, and the concept of originality. Most importantly, this thesis looks into the legal systems of the United States and the European Union, and attempts to determine whether AI-generated content could be eligible for copyright protection under those two legal systems.

The chapter on the European Union focuses on both, the EU in-general and also on two current member states of the EU: Finland and the United Kingdom. Both subchapters outline the current legislation within the aforementioned countries, as well as some case law in relation to the topic of the thesis. Conversely, the chapter on the United States looks into the current copyright regime in the US, attempting to determine whether AI-generated content could receive copyright protection according to the current laws and case law of the United States.