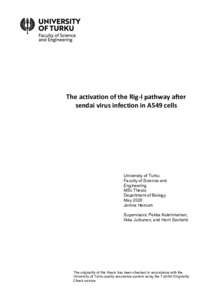 Sendai virus (SeV) is a single-stranded negative-sense RNA virus belonging to the family Paramyxoviridae. It is an important model and vector virus, and a murine pathogen. Innate immunity is the first to act on infections. Invading viruses are recognized by pattern recognition receptors (PRRs) belonging to innate immunity. Retinoic-acid inducible gene-1 (Rig-I) is one key cytosolic PRR and recognizes primarily short double-stranded RNA. Activation of the Rig-I pathway leads to the activation of the transcription factor interferon regulatory factor 3 (IRF3). Activated IRF3 translocates from cytoplasm into the nucleus. There it regulates the production of interferons (IFNs) and other pro-inflammatory molecules aiming to eliminate the virus. In this study, the activation kinetics of the Rig-I pathway were studied in vitro in A549 cells infected with SeV Cantell strain. The central interest was the activation requirements of the Rig-I: whether innate immunity responses are activated when the virus is not replicating. IRF3 movement, IFN-β1 and IFN-λ1 and SeV N gene mRNA expressions, and host and viral protein expressions in the infected cells were studied by immunocytochemical staining, qRT-PCR, and immunoblotting. In addition, experiments with cells treated with cycloheximide (CHX), which inhibits protein synthesis, were done. Interestingly, the results demonstrate that the Rig-I pathway activation occurred by one hour after the SeV-infection followed by effective IFN mRNA expressions between two and four hours after the SeV-infection, and these were independent of the virus replication. Consequently, it is enough that SeV enters the cell, without the virus replication, to be recognized and elicit antiviral responses.