China’s Changing Role in the New Era, a case study based on China’s first overseas military base in Djibouti

China’s Changing Role in the New Era, a case study based on China’s first overseas military base in Djibouti 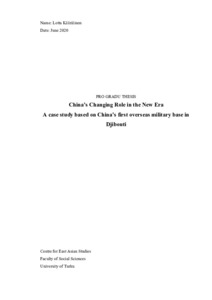 China´s foreign policy has been radically changing from the position of passive observer to active policy participant. This change can be examined in various ways through China´s actions in bilateral relations, world politics and multilateral institutions. China´s changing foreign policy is well researched and highly disputed. With this thesis the objective is to further elaborate these changes as well as participate in the wider discussion over China´s foreign policy. The study partakes in the discussion through a detailed case study based on China´s first overseas military base in Djibouti. The case study answers the research questions of how does China reason the opening of the military base in Djibouti and how the reasons portray the changes of China´s foreign policy and finally what sort of implications does the opening have for the future.

The study was conducted as a case study which supported open-minded and objective viewpoint for analysis. Official Ministry of Foreign Affairs press statements and People´s Daily and Global Times news articles were chosen as primary data. In total there were around ten official statements from Ministry of Foreign Affairs and 55 news articles from People´s Daily and Global Times. Due to both of the primary sources being strictly under the rule of China´s Communist Party, the data provided insightful glance on China´s foreign policy. Data was further analyzed by using content analysis to highlight and discover themes and connections with the current foreign policy.

The data suggests that while opening a military base is a new step on China´s security policy, the reasoning follows China´s well-established themes of non-interference and peaceful development. While at times contradicting, it seems unlikely that China is abandoning neither of these policies, but the terms´ meanings are developing and changing. It is likely that in the future the needs of People´s Liberation Army and China´s foreign policy drift further away from each other which will cause a stir. While Chinese base in Djibouti is unique in many ways, it can be seen as only testing ground for future military bases.