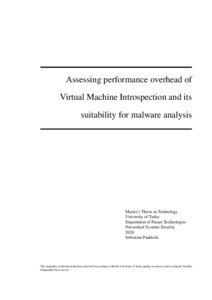 Virtual Machine Introspection is the process of introspecting guest VM’s memory and reconstructing the state of the guest operating system. Due to its isolation, stealth and full visibility of the monitored target, VMI lends itself well for security monitoring and malware analysis. The topics covered in this thesis include operating system and hypervisor concepts, the semantic gap issue, VMI techniques and implementations, applying VMI for malware analysis, and analysis of the performance overhead.

The behaviour and magnitude of the performance overhead associated with doing virtual machine introspection is analysed with five different empirical test cases. The intention of the tests is to estimate the costs of a single trapped event, determine the feasibility of various monitoring sensors from usability and stealth perspective, and analyse the behaviour of performance overhead.