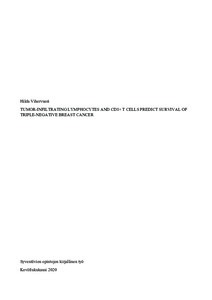 Triple-negative breast carcinoma is a group of breast cancers that is known for aggressive and unpredictable clinical behavior affecting also younger women. In immunohistochemical staining, triple-negative breast carcinoma is negative for estrogen- and progesterone receptors, proliferation marker Ki-67 and growth factor receptor HER2. Prognostic clinical factors usually used in evaluating the prognosis of breast cancer, such as spreading to lymph nodes, are not optimal in predicting the outcome in triple-negative cancer.
Immune response in malignancy has been widely studied in recent years in hope for new targeted therapies and even understanding the mechanisms underlying the formation of neoplasms. Regarding triple-negative breast cancer, the results have been divergent and scarce. However, it seems that this subgroup of breast cancers has even distinct immune microenvironment compared to other breast cancer types. The purpose of this study was to survey immunological microenvironment in triple-negative breast cancer by detecting a wide range of different immune cells and figuring out if they have any influence on the prognosis.
The material comprises of tissue samples collected during 2000-2015 in Turku University Hospital and follow-up data provided by Auria Biobank. Tissues were stained immunohistochemically in microarrays to detect immune cells and determine the activity of immune response. Part of the samples were evaluated with an automated analyzing tool ImmunoRatio. The tool did not detect some of the staining patterns, and those were evaluated by hand by an experienced pathologist.
The amount of stromal tumor infiltrating lymphocytes (TILs) and frequency of CD8+ T cells in the periphery of the tumor were both independent risk factories in this study. Each 10% increment in stromal TIL indicated 20% reduced risk of death. Other studied immune cells; B cells, macrophages and CD4+ T cells, were not significant prognostic factors in this study.
Based on this study, CD8+ T cells and stromal lymphocytes could be promising tools to improve prediction of the prognosis of triple-negative breast cancer patients. It would be a great help in clinical work to be able to identify those patients with aggressive and relapse prone disease, so the heavy and expensive treatments can be targeted.