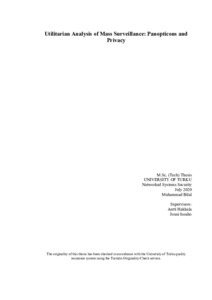 Utilitarian thinking comes under the wider framework of normative ethical theories which judges the morality of any act based on the outcomes achieved. Normative Ethics is the discipline of social sciences that comes under the head of philosophy which is based on moral principles. Based on such moral principles, any act is being considered as either right or wrong. Like any other domain, cyberspace also has some ethical values. To understand the ethics on Cyberspace, first we need to understand that how internet works and how many layers it has and what kind of activities are possible over every layer, respectively.
This thesis aims to explain the privacy issues caused by Panopticons related to illegal, unethical, and un-consensual mass surveillance across the internet via using various insidious methodologies. It also explains that who panopticons are and how this terminology came into existence and how it replicates current era’s mass surveillance? Moreover, it addresses the parameters under which any surveilling authority could be declared as a Panopticon.
It explains that how and why Panopticons are doing unauthorized, unethical and non-consensual mass surveillance and how that surveillance actually takes place and up to which extent Panopticons have gone to achieve their desired mode of surveillance and it highlights different actors that are involved in mass surveillance at different scales via different techniques. The involvement of Governments with or without the collaboration of Private Internet companies has also been a shady topic exactly till Snowden made his revelations which later on caused a drastic awareness among masses and opened new doors of discussion as well as urged authorities to take some practical measures in order to curb the mass surveillance. That is why, Snowden’s revelations have been taken as a case study to present the depth and techniques of mass surveillance that are in practice both by private and government organizations.
The analysis part holds the primary importance in this thesis, that’s why the thesis concludes with analyzing ethical aspects of Mass Surveillance via Utilitarian point of view which analyzes the Snowden’s act of reveling classified information and the corresponding top three accusations posed on him by USA’s house of representatives, followed by legal and cultural implications.