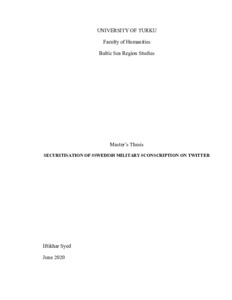 On March 02 2017, the Swedish government announced that it is bringing mandatory military services back into practice due to the shortage of military personnel and to meet country’ security needs. The practice had been abandoned in 2010 after being in place for well over a century. The announcement was a hot topic locally and internationally in the context of changing security situation in the Baltics. Political actors took to social media to deliberate with general public and to control the public discourse. This paper looks at securitisation discourse being deliberated through social media. Using a mix methods approach, I examined how social media, Twitter, facilitated securitisation discourse regarding Swedish military conscription. Twitter’s advanced search option is utilised to collect Top tweets posted during the first week of March 2017 that included keywords Sweden conscription or Swedish conscription. I apply van Dijk’s sociocognitive critical discourse analysis and Hansen’s intertextual research model in examining 21 tweets, along with the platform facilitated intertextuality and multimodality.

The analysis reveals that political actors framed and centred securitisation discourse through tweets and associated multimodal elements, in particular images and hyperlinks, while the discussion concerning human resource needs of the military was largely ignored. Tweets and comments exposed ideology–based themes and topics, including refugees as threat and Racism–Xenophobia, being exploited as discourse strands within securitisation discourse. Spatial references to Russia and its proximity to the Baltics are invoked by the actors as existential threats against which Swedish sovereignty needs protection. It is evident that the textual and linguistic elements of tweets along with their non–lexical components afforded by the medium are exploited by the actors in framing the discourse. Audience interaction is gauged by the likes, shares, and comments on each tweet; however, comment section more clearly shows discursive production of securitisation. It is imperative that a future comprehensive analysis take into consideration platform specific elements, such as interaction across platforms and Social Network Analysis (SNA) of actors, as this would allow us to understand how various discourse layers treat the same discursive event and how securitisation is being accepted, rejected, or repurposed based on networked communities.