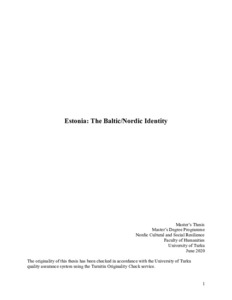 This Master’s thesis is presented on the subject of Estonia: The Baltic/Nordic Identity. My research on Estonia focuses on identifying key points of how a small Baltic nation was able to become the successful hub of technology and innovation after being under Communist rule for many years. Identifying historical, cultural, and scientific trends throughout Estonia are also discussed in this thesis to provide a solid foundation for Estonia’s position in the Baltic Region. The collapse of the Soviet Union was the perfect opportunity for Estonia to establish a modern identity and in my research, I looked at whether or not if the reforms passed by the Estonian government were successful in helping modernize their economy. In the long term, I see the reforms implemented by Estonia as successful in promoting economic growth and encouraging private enterprises to invest their products in the country.

By investigating Estonian advancements in the fields of technology and science, I will explain in the thesis how Estonia is the most advanced and sophisticated of the three Baltic countries. The most successful innovation of the tech industry was the development of Skype in Tallinn. Along with Skype, I also look at concepts such as e-democracy and e-government services in the country. I will look at other technological sources to show that Estonia continues to work on expanding their technological sector.

Developing a thesis revolving around Estonia enabled me to conduct research on a practical level about the impact the Baltic Region has on Europe. By observing different cultural and historical trends along with the latest advances of technology, I am able to create a positive conception of Estonia’s legacy as both a Nordic country and a Baltic country. A mixture of Western cultures and Eastern cultures is noted in the thesis because of Estonia’s connections with Germany and Russia, giving the nation a distinct identity.

The sources of this thesis will be composed of both historical and modern evidence to develop a conceptual narrative about Estonia along with scholarly articles. Each source is diverse and provides structure on how Estonia successfully became a modern hub for industrialization and development. I will incorporate different political and tech sources in my analysis to discover why Estonia became successful in its technological endeavors. The possibilities of researching present day Estonian companies are endless, and learning about the new discoveries they make each day to improve the Estonian quality of life.

I confirm in this thesis that Estonia has evolved significantly during the past 30 years and has successfully transformed into a leading edge country on the European continent. Estonia has successfully used their connections with the Scandinavian and other Baltic countries to come up with a unique identity. I also mention the Signing Revolution in this thesis because Estonians were able to use this event to make a successful attempt of reclaiming their independence from the Soviet Union. Upon completion, my hope is that this thesis will be used to continue further research on Estonia’s position in the Scandinavian/Baltic region.