Extraction and Characterization of Polysaccharides from Cultivated Mycelium of Inonotus obliquus

Extraction and Characterization of Polysaccharides from Cultivated Mycelium of Inonotus obliquus 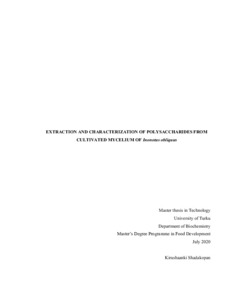 The medicinal value and the presence of diverse bioactive components have drawn the attention of researchers to medicinal and edible mushrooms in the recent years. Inonotus obliquus is a white rot fungus and an obligate parasite of the Betula species. It forms a sterile conk on the infected stem, called Chaga, which has been long consumed as a folk remedy in Finland and East-European countries. The health benefits of Chaga consumption have been connected to the presence of polysaccharides in the extracts, which have shown immunomodulating, anti-tumor and antioxidant activities.

The slow growth of Chaga in nature has led to the research of alternative methods for the polysaccharide production such as submerged cultivation of the mycelium, which is fast, easy to control and cost effective. In this study, polysaccharides of Inonotus obliquus mycelium, cultivated with the supplementation of sea buckthorn press cake, were extracted and purified. The extraction process included aqueous and alkaline extractions, followed by ethanol precipitation and different purification passages. The obtained polysaccharides were characterized in their total sugar, protein and phenolic contents, monosaccharide composition, and molecular weight. FT-IR spectroscopy was used for structural analysis.

The obtained results indicated the presence of glucose as the major component, along with substantial amounts of mannose and galactose. Other monomers such as xylose and arabinose were also found. Small amounts of galacturonic acid present in the monomer composition was connected to the pectin contained in the supplemented sea buckthorn. The molecular weights of the main polymer populations were determined to be 6.80×105 Da, 1.17×103 Da, 6.51×104 Da, and 1.51×104 Da for hot water and alkaline extracts of (0+0.5) and (1+2) fractions respectively. Furthermore, the FT-IR spectra confirmed the presence of proteins, uronic acids, and α- and β-glucans.