Luxembourg's evolution from city to smart city with 5G 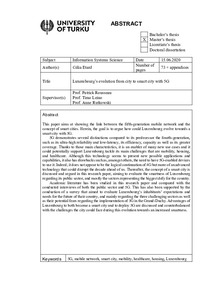 This paper aims at showing the link between the fifth-generation mobile network and the concept of smart cities. Herein, the goal is to argue how could Luxembourg evolve towards a smart city with 5G.
5G demonstrates several distinctions compared to its predecessor the fourth-generation, such as its ultra-high reliability and low-latency, its efficiency, capacity as well as its greater coverage. Thanks to those main characteristics, it is an enabler of many new use cases and it could potentially support Luxembourg tackle its main challenges that are mobility, housing, and healthcare. Although this technology seems to present new possible applications and capabilities, it also has drawbacks such as, amongst others, the need to have 5G-enabled devices to use it. Indeed, it does not appear to be the logical continuation of 4G but more of an advanced technology that could disrupt the decade ahead of us. Thereafter, the concept of a smart city is discussed and argued in this research paper, aiming to evaluate the smartness of Luxembourg regarding its public sector, and mostly the sectors representing the biggest defy for the country.
Academic literature has been studied in this research paper and compared with the conducted interviews of both the public sector and 5G. This has also been supported by the conduction of a survey that aimed to evaluate Luxembourg’s inhabitants’ expectations and needs for the future of their country, and mainly regarding the three challenging sectors as well as their potential fears regarding the implementation of 5G in the Grand-Duchy. Advantages of Luxembourg to both become a smart city and to deploy 5G are discussed and counterbalanced with the challenges the city could face during this evolution towards an increased smartness.