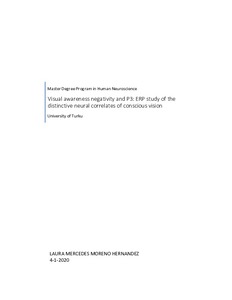 This research aimed to replicate the previous findings of Koivisto & Grassini (2016). Using event-related potentials (ERPs), we studied the neural correlates of visual consciousness. Specifically, we wanted to study visual awareness negativity, that has been reported as the first ERP correlate of consciousness as its latency seems to be fast enough to be the neural correlate of the phenomenal consciousness, which could be the earliest manifestation of consciousness. We also studied the late positivity, that seems to reflect the cognitive components of the reflective consciousness, as it involves the voluntary operations performed with the object like identify it or recognize it. Surprisingly, and despite the previously reported in literature, in this study we did not observe visual awareness negativity, but found that only late positivity correlated with conscious perception. We conclude that our results do not support the hypothesis about VAN as the correlate of phenomenal consciousness, whilst our observations regarding P3 appear to support the hypothesis about reflective consciousness occurring in this period. We interpret these findings as possibly affected by a different statistical analysis. Also, the fact that
phenomenal consciousness can be understood in various ways may lead to contradictory findings. However, more research is necessary to find alternative explanations to our findings as well as other experimental approaches to the study of neural correlates of consciousness.