[11C]Me-DPA for TSPO imaging, synthesis of boronic ester precursor for labeling with [11C]CH3

[11C]Me-DPA for TSPO imaging, synthesis of boronic ester precursor for labeling with [11C]CH3 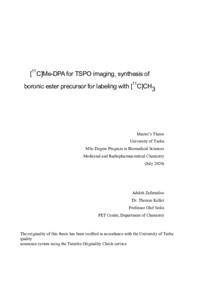 The translocator protein 18 kDa (TSPO) is overexpressed during neuroinflammation. TSPO- targeting tracers can be used to study neuroinflammation in diseases such as Alzheimer’s disease (AD) and stroke. [18F]F-DPA, a TSPO-specific tracer, is a recently developed analogue of [18F]DPA-714 and it was developed to improve the metabolic stability. The methylated version has been previously reported to have a high binding affinity. Hence, in this study the necessary precursor is synthesized and labeled with [11C]iodomethane.
The purpose of this study is to synthesize a suitable precursor for labeling with [11C]CH3I and to introduce the [11C]CH3 group onto the same position that is fluorinated [18F]F-DPA.
The advantage of labeling with carbon-11 is to avoid using electrophilic and nucleophilic 18F-fluorination which have limitations during syntheses. Due to the F-DPA fast wash out, it would be suitable to label it with carbon-11.
The pinacol boronic ester precursor was made successfully; although, 3-cyano-N,N-diethyl-4- (iodophenyl)-4-oxobutanamide and pinacol boronic ester productions were time consuming and challenging especially the purification process.