Strong Arms and Idle Minds : Canadian Laborers and Masculine Imagery in the Rhetoric Strategies of Frontier College Reformists in the 1920s

Strong Arms and Idle Minds : Canadian Laborers and Masculine Imagery in the Rhetoric Strategies of Frontier College Reformists in the 1920s 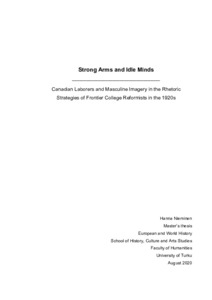 My master’s thesis focuses on the masculine language and rhetoric used by Ca-nadian social reformists Alfred Fitzpatrick and Edmund Bradwin, who operated an adult education organization named Frontier College in the early 20th century. Frontier College’s main agenda revolved around rural industry spaces such as lumber camps, mining towns and railway construction sites, which had in the turn of the century grown to employ an unprecedented number of transient workers from diverse backgrounds, and were largely defined by poor and unreg-ulated housing conditions. The frontier laborers, as men in their physical prime haunted by idleness of the mind, caused great anxiety in the public imagination. Fitzpatrick and Bradwin believed that intervention in form of technical, cultural and moral education and housing reforms would work toward wholesome assimi-lation and canadianization of frontier laborers.
My primary sources consist of two publications, Fitzpatrick’s University in Over-alls (1920) and Bradwin’s The Bunkhouse Man (1922), and my research ques-tions center around the ways masculinity and manhood were employed in both texts as rhetorical strategies to impact both the workers and the educated mid-dle-class audience. I discuss the themes, repetitions and implications found in the texts using the method of qualitative close reading and by contextualizing them in the contemporary ideals of physical, independent and assertive mascu-line performance. The theoretical framework of this thesis stems from feminist gender theory, performativity of gender and the concept of multiple masculinities.
The analysis carried throughout the thesis shows that the reformers’ apparent fixation on the workers’ masculine performance was most apparent in their lan-guage of exaggeration and emasculation, which worked as a tool of empower-ment and inspiration for both the laborers as well as the middle-classes who re-flected their masculinity on the imagery of idealized frontier manhood. Additional-ly, the reason why manhood arose into such a prominent position in the rhetoric likely stemmed from the societal anxieties over immigration, ethnic and racial diversity and non-conforming sexual and social behavior in relation to the middle-class Upper Canadian and British cultural values.