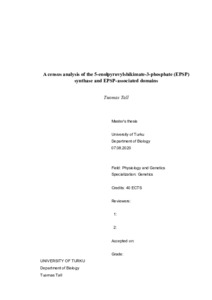 Glyphosate is one of the most used herbicides against weeds that targets the enzyme 5-enolpyruvylshikimate-3-phosphate synthase (EPSPS). EPSPS is the central enzyme in the shikimate pathway to synthesize 3 essential amino acids in plants, fungi, and prokaryotes. Although this pathway is not found in animals, herbicide may affect the biodiversity of environmental and host-associated microorganisms.

Data was gathered from public databases of proteins (e.g., Pfam and COG). The analysis of the distribution of the EPSPS was performed using Excel functions and a bipartite network was analysed with the program Cytoscape. The Count program was used to assess evolutionary scenarios by Dollo’s maximum parsimony, and the phylogenetic trees were visualized with iTOL.

The EPSPS enzyme is widely distributed in archaea, bacteria, plants, and fungi. The multi domain structure of the EPSPS in fungi is strongly associated with six other genes of the shikimate pathway. The most common multi domain structure is composed by a group of five enzymes (HQ synthase, EPSPS, SKI, DHquinase I and Shikimate DH), which I call in this thesis the “Major 5”.

The EPSPS multi domain structure in fungi ranges between two to eight domains. The evolutionary analysis shows that the ancestral of fungi had a multi domain structure of six domains. Thus, there have been domain gains and losses throughout the evolution of the EPSPS in fungi. Further investigations are needed to determine the effect of the EPSPS-associated domains to glyphosate resistance. A scientific article that includes data from this master thesis is publicly available as a preprint at biorxiv and submitted to a peer-reviewed Nature Methods journal.