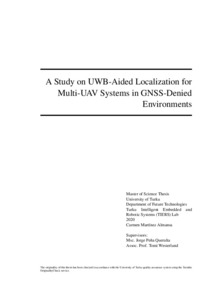 Unmanned Aerial Vehicles (UAVs) have seen an increased penetration in industrial applications in recent years. Some of those applications have to be carried out in GNSS-denied environments. For this reason, several localization systems have emerged as an alternative to GNSS-based systems such as Lidar and Visual Odometry, Inertial Measurement Units (IMUs), and over the past years also UWB-based systems. UWB technology has increased its popularity in the robotics field due to its high accuracy distance estimation from ranging measurements of wireless signals, even in non-line-of-sight measurements. However, the applicability of most of the UWB-based localization systems is limited because they rely on a fixed set of nodes, named anchors, which requires prior calibration. In this thesis, we present a localization system based on UWB technology with a built-in collaborative algorithm for the online autocalibration of the anchors. This autocalibration method, enables the anchors to be movable and thus, to be used in ad-doc and dynamic deployments. The system is based on Decawave's DWM1001 UWB transceivers. Compared to Decawave's autopositioning algorithm we drastically reduce the calibration time while increasing accuracy. We provide both experimental measurements and simulation results to demonstrate the usability of this algorithm. We also present a comparison between our UWB-based and other non-GNSS localization systems for UAVs positioning in indoor environments.