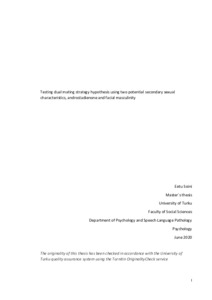 Dual mating strategy hypothesis has been influential in research of human mate choice for twenty years. According to dual mating hypothesis women prefer different attributes in men in different phases of menstrual cycle. This may have been adaptive as it can lead to situation where the offspring is fathered by genetically strong male, who may not be willing to invest in the offspring and women may have gotten help in rearing the offspring from another man, not knowing that he is not the biological father. Although first studies found support for the hypothesis, recently it has been challenged as earlier studies reporting significant findings have been criticized for their methodology and studies, using larger sample sizes in comparison with earlier studies, have failed to find support for dual mating hypothesis. In the current study dual mating strategy hypothesis was tested using two potential cues of genetic quality, facial masculinity and putative human chemosignal androstadienone. Current study was conducted as placebo controlled, double-blind between-subjects design. Eighty-one (81) self-reported heterosexual females differing in fertility status (fertile phase of menstrual cycle n=17, non-fertile phase of menstrual cycle n=30 and use of hormonal contraceptives n=34) participated in the study. Participants task was twofold: first to rate attractiveness of individual pictures of male faces, and to choose the more attractive face from morphed face pairs. Both evaluations were done twice, once before and once after the exposure to androstadienone or placebo treatment. Facial attractiveness was rated from individual pictures and masculinity preference was tested using forced choice task with face pairs consisting of two morphed versions of same face, one morphed to be more masculine and the other morphed to be more feminine. At half point of the rating task half of the participants received androstadienone (n=41) and half were in placebo condition (n=40) to test if androstadienone would increase perceived attractiveness. Analyses showed no preference shift towards masculinity in fertile compared to non-fertile phase of menstrual cycle, and no decrease in masculinity preference was found in hormonal contraceptive users as dual mating theory predicts. Also, no evidence was found that androstadienone increases female perceptions of male face attractiveness as some studies have found. Our results found no evidence for the link between women’s preference for cues of masculinity and their hormonal status, adding up to the growing body of research failing to find support for dual mating strategy hypothesis. Regarding androstadienone we did not find support for its role as chemosignal of genetic quality, adding up to controversial field of results.