Voluntary departures, expulsions, or profitable extortion? : The politics of expulsion and the ethnic Chinese Vietnamese refugees 1975 - 1979 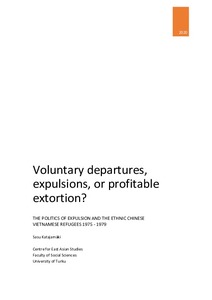 This thesis examines the origins, implementation and motives of the ethnic Chinese expulsion campaign that took place in Vietnam between early 1978 and mid-1979 and the broader post-Vietnam War political and societal developments starting from 1975 that were connected to the ethnic Chinese expulsions in Southern Vietnam. The main purpose of this historical study is to provide a clear account of how the expulsion campaign came to be commenced in southern parts of Vietnam, how it was implemented and to examine the politics and reasons that were behind it.

The role of the Vietnamese government in the ethnic Chinese exodus/expulsions and in the emergence of the larger Vietnamese boat people crisis of 1978 and 1979 has been debated since the events took place, but few historical studies have re-examined this topic since more sources have become available. The main conclusion that this thesis presents on this subject is that the Communist Party of Vietnam (CPV) and Public Security Bureau officials and southern party cadres operating under their directives used covert voluntary departure program as means to expel ethnic Chinese from Southern Vietnam between late July – early August of 1978 and July 1979. This program was officially only open to the ethnic Chinese and in order to leave the refugees had to pay a sizable “exit tax” to the government and a fee to the organizers who were supplying the boat and other means for the departure. I argue that behind this voluntary departure program and these expulsion policies were politics and distinct policies that aimed to facilitate these boat departures of the ethnic Chinese minority members that were perceived to be a possible fifth column in the Vietnamese society. Furthermore, I posit that in addition to the political motives, in the southern parts of the SRV there was a clear economic motive driving the expansion of the departure program that resulted from both Vietnamese governments’ and Vietnamese authorities’ desire to extort wealth from the ethnic Chinese individuals. This economic incentive according to many signs also affected how many departures were ultimately organized.

Through a historical social scientific approach to the subject, this thesis explores how these paid ethnic Chinese boat refugee departures in Southern Vietnam were part of the larger the expulsion campaign in the country and argues that we should ultimately understand these departures through their wider societal and political context.