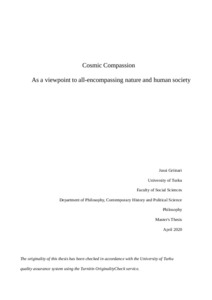 The present essay is an attempt at pursuing understanding about the widely spread tendency of human thinking to perceive ”nature” as the outside of human society and culture. The attempt has been carried out by investigating, and also developing, the notion of compassion found in selected writings of Jean-Jacques Rousseau (1712–78). The essay follows Rousseau in finding compassion a fundamental aspect of the existence of, at least, many animal species and then examining how the social development of humanity has affected our relation to this ”pure emotion of nature”. Inspired by Rousseau, and secondary level education about modern sciences, the essay adopts an outlook of nature as all-encompassing connectedness of worldly beings, outside of which nothing can exist. Thus human societies, in which ideas about defining nature as the outside of humanity are conceived, are also recognised as being thoroughly in and of nature. This result will then provide some interesting ways of viewing, for example, the nature of ”environmental problems” that human societies are nowadays known to be facing.