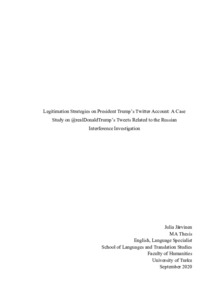 This thesis studies how the President of the United States of America, Donald Trump, uses his Twitter account, @realDonaldTrump, to (de)legitimate his views and stance on the Russian interference investigation and the charges he faced. In addition, this study examines whether the different (de)legitimation strategies used change when the official results of the “Report On The Investigation Into Russian Interference In The 2016 Presidential Election” are published. The aim was also to examine the underlying meanings behind these different (de)legitimation strategies.

In order to answer my research questions, I comprised a micro-corpus comprised of @realDonaldTrump’s tweets. To locate the related tweet, I used a selection of key words that were used to discuss the matter. Retweets, direct quotes, pictures, videos and comment sections were left out, since the focus was mainly on @realDonaldTrump words. The corpus was analyzed with Van Leeuwen’s (2007) framework of (de)legitimation and Van Dijk’s (1998) theory of ideological square. This study was also aimed to test if these frameworks can be applied to this type of topic and data.

After carefully examining the corpus, it became evident that @realDonaldTrump relies heavily on delegitimating his opposition through the use of moral evaluation, morally loaded language and other modal elements. He also uses these elements to legitimate his side. Legitimation through authorization is used to corroborate his stance. @realDonaldTrump emphasizes the negative aspects of the other side, while emphasizing what is positive on his side. He also concentrates on suppressing negative aspects related to him or his team. Rationality and mythopoesis are also employed, but in some cases these strategies remain ambiguous and open for differing interpretations. The biggest perceivable changes, around the time of publication of the results of the investigation, are related to the lead investigator Robert Mueller. Especially, Mueller’s placement on the Us/Them -axis and ideological square varies. It becomes clear that these (de)legitimation strategies are used to convince the reader of President Trump’s innocence, decrease the legitimacy of the investigation and link the reader to the side of @realDonaldTrump.

This study proved that both of the frameworks can be successfully applied to this topic in this dataset, even though some limitations exist. Having said that, the scope was relatively small and further research on a different topic in the field of political discourse with possibly a larger data could prove itself very interesting.