'Me as a Learner of English': Self-Concept and Learner Beliefs in Finnish Advanced L2 Learners' Autobiographical Narratives 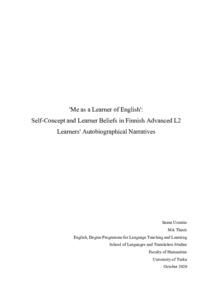 Self-concept has interested researchers for decades, although within the field of Second Language Acquisition, mostly quantitative methods have been used in self-concept research. Nevertheless, qualitative methods offer a more holistic and detailed view of self-concept and the factors that affect its development. Narratives are a rather novel qualitative method for examining self-concept in language learning, especially in Finland.
The aim of this study was to examine how Finnish learners of English in upper secondary school describe themselves as learners of English, and which factors, according to the learners, have been influential to their self-concept development. In particular, learner beliefs and their relationship with self-concept were studied alongside other factors. Autobiographical narratives were collected from 44 Finnish upper secondary school students. The narratives were analyzed using thematic analysis, and four learner groups were identified according to the self-descriptions. Mercer's (2011c) categorization of internal and external factors was used as a framework in identifying influential factors in the narratives.
The findings suggest that self-concept is best understood as a complex, dynamic, hierarchical construct instead of a two-dimensional continuum. The learners described a variety of factors that had been influential to their self-concept formation, for instance, earlier experiences of learning and using English, affective responses, and feedback from significant others. Furthermore, the learners believed that practice was more important than natural talent in learning English, and that English would be useful for them in the future. In other words, the learners expressed a belief that they would be able to achieve their goals under the right circumstances, regardless of how negatively or positively they described themselves as learners of English.
In conclusion, narratives were found to be an adequate method for examining individual trajectories of self-concept development as well as trends within groups of learners. In the future, following the same learners over longer periods of time and complementing narratives with other research methods will shed more light on L2 self-concept.