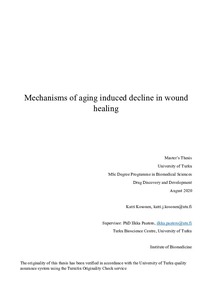 The impaired wound healing is a significant concern affecting millions of people worldwide. The increased incidence is mainly caused by growing number of aged individuals, whose potential to repair tissues and healing of wounds has decreased. The aim of this study was to investigate gene functions affecting aging related decline in wound healing. In addition, the aim was to study the potential of these genes as drug targets and the effect of targeting drugs to improve wound healing. This study was performed with fast-aging turquoise killifish (Nothobranchius furzeri) by comparing wound healing between young and old fish. A piece of tail fin of the fish was cut, and the fin regeneration was measured during several days. The gene expression and histological samples were also analysed. Finally, two drugs, which activate (roxadustat) and inhibit (semaxanib) blood vessel growth related genes, were administered to old fish. The differences between these drugs on wound healing process were observed. As a result the fin regeneration was decreased with old fish compared to young fish, and no difference was found between males and females. After drug administration, growth length and rate were declined with semaxanib group, whereas growth rate was increased with roxadustat group compared to control group. Tissue regeneration and wound healing was decreased with old fish and several genes participate to wound healing. However, searching of potential drug targets from these genes and drugs to improve the wound healing process needs more investigation.