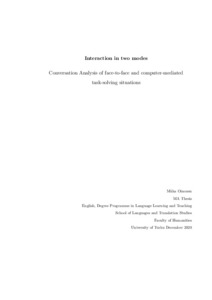 Discourse studies and conversation analysis has been interested in interaction fora long time. The main focus has been in spoken interaction but also computer-mediated communication has gathered more and more interest. For spoken inter-action, Sacks, Schegloff, and Jefferson (1974) have been fundamental in describingturn-taking in interaction. Swain, on the other hand, has studied how learnersnegotiate for meaning in conversation. In this thesis, the interaction of learnersin two modes of communication, face-to-face and computer-mediated, was studied.The participants were advanced learners of English studying in a Finnish university.The goal of the study was to examine how learners interact in the two modes andwhat considerations should be done regarding learning tasks in updating the lan-guage classroom to the CMC medium. The method of analysis was ConversationAnalysis. Generally, it was found that for most learners the mode of communica-tion does not seem to greatly affect performance but that there are some whoseperformance in one mode does not predict performance in the other. Furthermore,learners have trouble adapting turn-taking rules from the more traditional face-to-face communication mode to the computer-mediated environment. As such, it seemsuseful to offer the learners tools to externally control turn-taking in such situations.It should also not be assumed that high-interaction learners perform similarly in,for example, the computer-mediated environment.