Patenting Practice : A Focus On Medical Methods of Treatment

Patenting Practice : A Focus On Medical Methods of Treatment 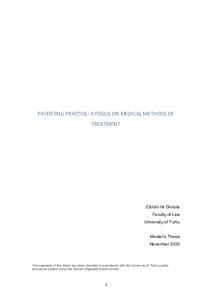 The thesis explores the case of medical methods of treatment and their patentability or lack thereof, depending on the jurisdiction. Consider medical devices, pharmaceuticals and biotechnology: these are all theoretically patentable (if the requirements are met, of course, and after much debate and controversy in many cases), and this presumably controls the market and aids in the protection of the public through the creation of products that are carefully designed and produced. Medical methods of treatment, however, are afforded no such protection in approximately 80 countries, including those governed by the European Patent Convention (EPC), which raises the question: how can a novel method or treatment be used for the well-being of the public, if these novelties cannot be adequately disseminated via the patent system? For a number of reasons, methods of medical treatment have historically been excluded from patent protection in many jurisdictions. Two fundamental questions thus act as justification for the chosen research topic, firstly, why this is so, and secondly, should it be so?

The jurisdictions examined are the countries signatory to the European Patent Convention, contrasted with the USA and Australia, in an effort to create a legislative comparative analysis with the hope of illuminating the issue from a variety of perspectives, since legal systems are created and coloured by the social systems that surround them. These three jurisdictions are considered here with the aim of illuminating international comparisons between the countries bound by the EPC and two large common law jurisdictions where patenting medical methods of treatment is permitted, at least in theory if not always in practice, and with whom the EPC countries may often share some convergence in the sense of legal culture. The aim of the comparative analysis is to generate further clarity regarding why methods of medical treatment are legislated for differently in the aforementioned jurisdictions and from there to consider the validity – or indeed invalidity – of patenting medical treatment methods on the basis of the cases and legislation discussed.