Acquisition of Prepositions in View of Crosslinguistic Influence and Input in L2 English : An Analysis of Ukrainian Learners’ Written Language

Acquisition of Prepositions in View of Crosslinguistic Influence and Input in L2 English : An Analysis of Ukrainian Learners’ Written Language 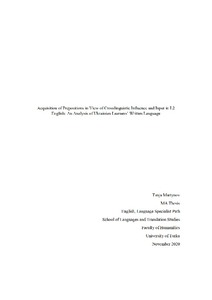 Recently, the focus on learners’ errors has been among the most relevant issues in second language acquisition. The aim of this paper is to study the erroneous forms produced in writing the English prepositions along with investigating the crosslinguistic influence and language input as contributing factors. English prepositions and prepositional phrases being an important functional part of the language were considered as an appropriate means to investigate the extent of committed errors as well as to seek for the evidence of language transfer and influence of input. In order to supplement the general knowledge about the acquisition of English in a relatively young country, Ukrainian students of the upper secondary schools located in one of the cities of the Central Ukraine were chosen to be the subject of my investigation. 80 participants were asked to fulfill 5 exercises in a grammar test and fill in the questionnaire. The research materials were tailored to provide the necessary data for answering the three research questions.

The common-practice methods including error analysis, transfer analysis, and comparative approach were used for the research. The results showed a high content of errors in the elicited data with a substantial part of deviations presumably caused by native language transfer, and a low level of extracurricular input though having an obvious impact on the language performance. Based on the result of this study, it was suggested to minimize the use of Ukrainian while teaching English and to increase the amount of in-class language input and output as a possible option to improve the language performance by Ukrainian learners.