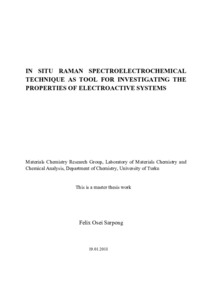 The electrochemical polymerization of 3,4-ethylenedioxythiophene (EDOT) monomer as conducting polymer was synthesized on various working electrodes (WE) which includes gold (Au), platinum (Pt), glassy carbon (GC) and Fluorinated Tin Oxide (FTO) in different electrolytic solvent medium. The solutes used in the aqueous medium (H2O) was potassium chloride (KCl) salt and sodium polystyrene sulfonate (NaPSS) and the solute used in the organic solvent medium which is acetonitrile (ACN) was tetrabutylammonium hexafluorophosphate (TBAPF6).
A thin film of the conducting polymer poly(3,4-ethylendioxythiophene) (PEDOT), electrochemically polymerized on FTO, Au, Pt and GC, were studied by cyclic voltammetry (CVs) in order to elucidate the electrochemical properties of the PEDOT films polymerized using different electrolyte media.
In situ Raman spectroscopy measurements were carried out for PEDOT films electropolymerized on Au in different electrolyte solvent medium and the spectra and its corresponding images were obtained and compared accordingly to explain the doping process of the PEDOT film.
UV-Vis spectroscopy measurements were also performed on the films on FTO to present a study on the p-doping of the PEDOT films which was in tandem with the characterization of Raman spectra measurements.