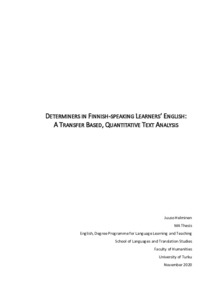 This thesis studied texts written by Finnish-speaking learners of English. The goal of this
study was to examine how Finnish-speaking learners use determiners in their written
English. English has traditionally been difficult to learn for native Finnish-speakers, as
the languages are quite distant from each other. This study focuses specifically on
determiners, as the challenges a Finnish-speaking learner faces can be more
comprehensively understood by examining a linguistic system that greatly differs
between the two languages.
The texts analyzed in this thesis originated from the YKI-Corpus; a collection of essays
written by candidates taking The National Certificate of Language Proficiency
examination, compiled by the University of Jyväskylä for research purposes. Essays were
taken from 30 participants in total, all of whom were native Finnish-speakers taking the
examination in English. 15 of the learners took an passed the exam on intermediate level
(B level on the Common European Framework of Reference), 15 on advanced level (C
level on CERF). The texts were analyzed using two Natural Language Processing tools:
Simple Natural Language Processing Tool (SiNLP) and a Python extension library spaCY.
All determiners in the texts were first counted and categorized, then analyzed and
compared using the statistical analysis tool SPSS.
The results of this study indicated that Finnish-speakers prefer articles as their
determiners: 57 % of all determiners were some type of an article across both
proficiency levels. Definite articles were the most common type of an article on both
levels. Advanced level learners used a higher number of determiners per word than
intermediate learners, slightly over 18 %, which seemed to be very close to the ratio of
native level speakers. Advanced level learners also used zero articles much more often,
whereas intermediate level learners preferred possessive determiners instead. Overall,
a higher proportion of articles, especially zero articles, as well as an increased number
of determiners per word suggested a higher level of proficiency in English. However, it
is outside of the scope of this thesis to further analyze the reasons for these differences,
as that would require more extensive, perhaps qualitative research.